You are here:
Thermography 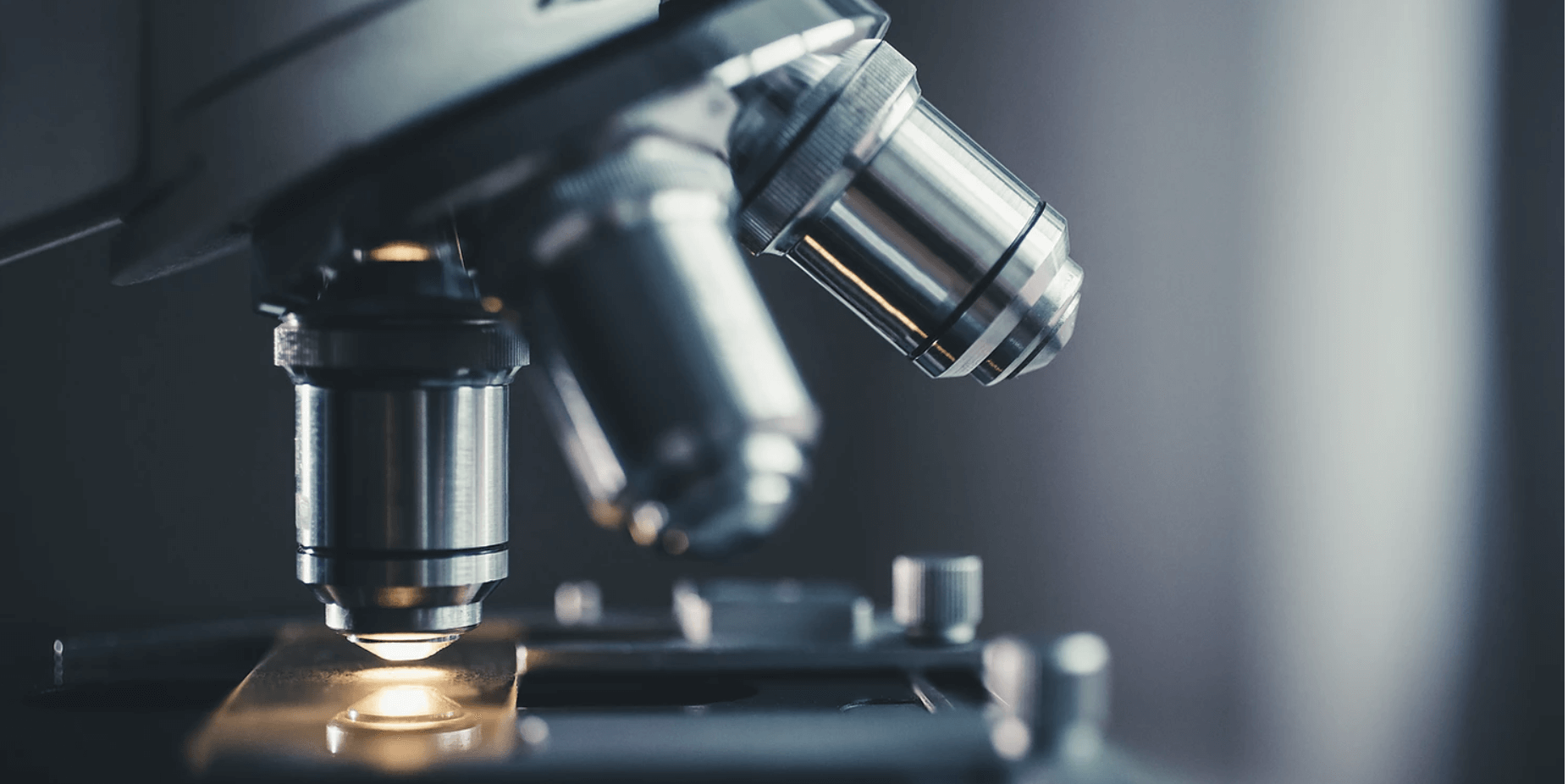 In today’s electronics, high electron mobility transistors (HEMTs) have reached impressively small sizes. These devices can have 50+ gates in a span of a few millimeters, and often have feature sizes less than 0.5μm. During operation, heat is deposited in these features resulting in astronomical power densities around the microscopic gates. This causes gate region temperatures to spike compared to the surrounding substrate. Below is an example temperature profile around a 0.4μm gate taken from a GaN-on-SiC HEMT operating at 5W/mm: 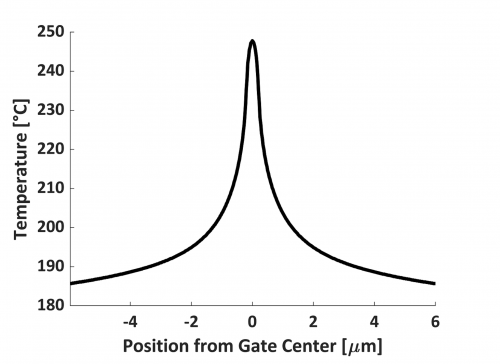 The industry standard measurement method for high power semiconductors is infrared (IR) thermography. IR imaging is an optical technique, where electromagnetic radiation of a certain wavelength is collected, and the signature of the incoming radiation allows us to determine the temperature.

The technique often uses an IR camera, operating in the infrared part of the electromagnetic spectrum with wavelengths on the order of 10μm. Due to diffraction, the resolution of optical imaging techniques is limited by this incoming wavelength. There are a few other factors that go into measurement resolution, of course, but the bottom line is: IR cameras are typically diffraction limited to a resolution in the 3-10μm range [1].

This is a problem when you have very sharp peaks – just as you do near the gates. With gates down to 0.25μm in size, IR thermography is measuring temperature on a length scale that is a full order of magnitude larger. Because of this, the camera’s output is really a spatial averaging around the peak, which underpredicts the peak temperature by including lower temperature signals from the surrounding substrate in the average. This issue is illustrated below. 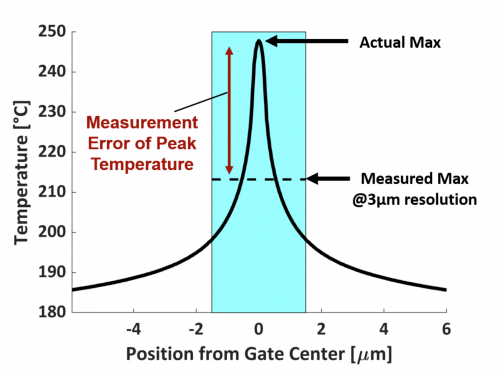 Of course, the worse the resolution gets, the bigger this problem becomes. For the representative temperature profile, we can plot how much the peak temperature will be underestimated as a function of the thermography spatial resolution: 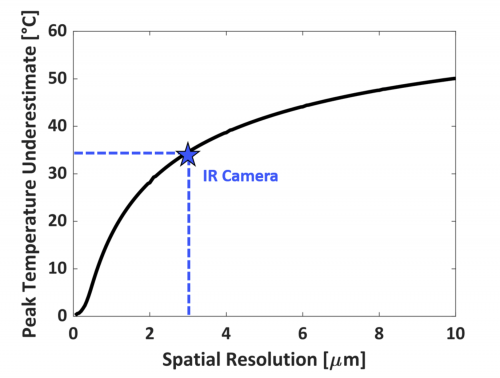 What can we do about this? Often, industry will incorporate thermal FEA analysis to supplement the IR measurements. Measurements are taken by the IR camera, which are then fed into a more highly resolved thermal model to come up with an adjusted temperature at the gate. This improves the prediction, but it’s hard to verify with high certainty due to factors like model accuracy, variable calibration, IR reflectivity off of metals, IR transparent materials, etc. This technique also requires very fine meshes to resolve the small feature sizes, which depending on the complexity of the model, becomes computationally expensive for each measurement taken.

As an alternative, there are higher resolution measurement techniques emerging that could remedy some of these challenges. Two such examples are micro-Raman thermography and thermoreflectance thermography.

Micro-Raman (μRaman) thermography is one candidate for high resolution measurement of temperature in semiconductor devices [2]. Micro-Raman involves exciting electrons in a semiconductor material using a laser source in the visible spectrum, and collecting Raman scattered light of shifted wavelengths that is emitted due to phonon activity in the semiconductor lattice. The wavelength of the scattered light changes with temperature due to changes in the lattice as the substrate heats up. The substrate temperature can then be interpreted by knowing the spectral behavior of a given material, usually obtained by way of calibration and theory.

Thermoreflectance (TR) is another optical thermography technique that is growing in popularity [3]. Thermoreflectance operates on the principle that as a material’s temperature changes, small changes in the surface reflectivity are induced. Therefore, by shining a light in the visible spectrum on the surface of a sample and collecting the reflected light, the temperature can be determined. How much the surface reflectivity changes is a function of material as well as incoming wavelength, which can be obtained through careful, well controlled calibration.

These two more recent approaches operate in the visible part of the spectrum, whose wavelengths are shorter than those in IR thermography (visible ≈ 400-700nm, IR ≈ 5-10 μm). Therefore, the diffraction limit is reduced significantly, resulting in spatial resolutions on the order of 0.5-1.0μm. As seen in the plot below, this offers a major improvement over IR techniques as far as getting a more accurate estimate of the peak temperature. 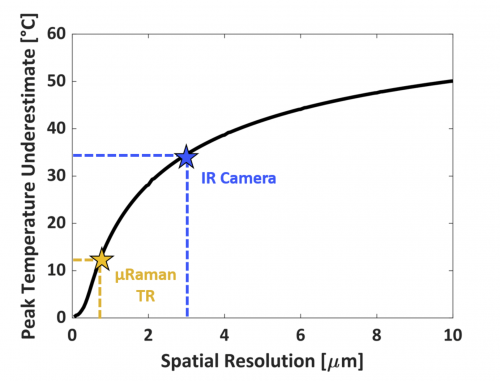